Argument from authority (Latin: argumentum ad verecundiam) is a fallacious type of argument where A argues that a proposition is true on the grounds that B says that it's true. B may or may not be an authority on subject S, but A will always consider him to be. 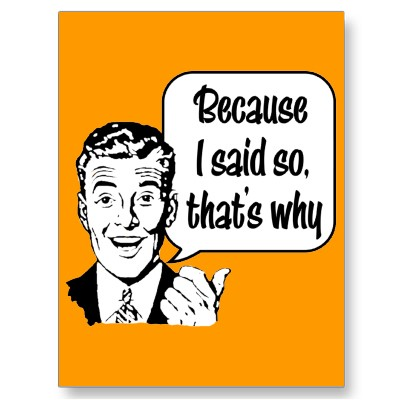 Such arguments take the following form:

It may seem strange that we have no valid reasons to be certain about what B says. After all, that's why he is an expert, right? Right, but that does not mean anything regarding the truth of his claims. As with the previous fallacy, claim X's soundness cannot be based on what B, or the majority, believes.

It may be that, in most cases, what Stephen Hawking says is true. But the argument "Stephen Hawking said that black holes behave in way X" is no more true than replacing "Stephen Hawking" with any other person. What is true though, is that since Stephen Hawking is an expert on the field, and we assume that he bases his theories on well worked-out models, and since what he said in the past was true (inductive reasoning), we are justified in testing his theories and not somebody else's. Whether theories are true or false, however, has nothing to do with who proposed or thought of them.

"So you are saying that we're not justified in believing the astronomer and not the anthropologist or the economist when she says that we have good reasons to believe that Planet 9 exists?", you may ask. Ofcourse we are justified. But what we must realize is that that carries a probability of error. Less if the anthropologist or the economist were to say the same thing, but it still does.

In this case, we can only be certain if we observe a body, that behaves like Planet 9 should, according to the theory, and based on our current models, is defined as a planet.
What people say, no matter how much expertise they have, is just considered a probability. Not a certainty.

DurhamAHS
We are a student society based in Durham University (UK) catering for non-religious students and those interested in issues connected to Atheism, Secularism and Humanism. We also welcome non students to most of our events. This blog is used for us and members to publish articles and to share details and reviews of our events. Connect with us on social media using the links below! ----------------------------------------------------------- All views expressed in this blog are the individual authors own and do not necessarily represent the views of the society as a whole or its executive committee nor those of the organisations with which the society is affiliated (the BHA and AHS). A variety of authors are invited to produce content so there may be very different views presented.